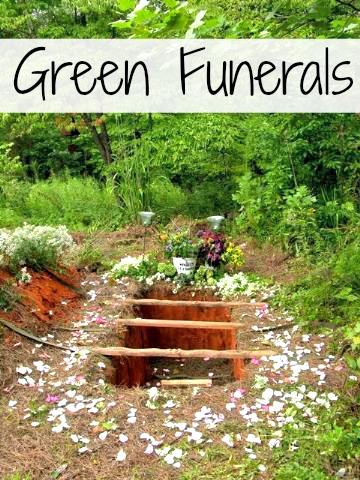 I know funerals are not a particularly happy topic and most people don’t like discussing their “final arrangements” but I came across this article on  a message board and was intrigued. The article discusses the concept of “green funerals.” I have never liked the idea of being pumped full of chemicals and put in an air tight box for all eternity. Cremation is not an option because of  my religious beliefs. I also think the amount of money spent to prepare a body for a funeral and on a casket is ridiculous. This article in Audubon Magazine provides an alternative. In my opinion, a really beautiful alternative.

The article first explains some of the problems with the funeral industry:

“we go into the ground pumped full of formaldehyde-based embalming fluids, which cause elevated rates of cancer in workers who handle them every day and which don’t actually halt our tissues’ decay. (Our blood, other bodily fluids, and waste are pumped out and simply washed down the drain.) Our remains are often sealed inside “decay-proof” metal caskets, and entombed in concrete vaults to prevent the subsidence that occurs when the casket inevitably collapses. The grave is dug by backhoe, not human hands.

A barrage of pesticides and herbicides, along with fossil-fuel-guzzling, pollution-emitting machines, keep our final resting places so tidy—and sterile—that some cemeteries even remove offerings of fresh flowers.

Choosing cremation, the choice of one-third of the Americans who die each year, may save space in graveyards, but it isn’t particularly green either... cremation releases carbon dioxide: about 350 pounds per cremation, according to an Australian study—soot particles, sulfur dioxide, and trace metals, including mercury from dental fillings. (Other potentially harmful items, such as pacemakers and their batteries and some prostheses, must be removed before cremation.) Then there are the fossil fuels consumed in heating the ovens to 1,400 to 1,800 degrees Fahrenheit for the two and a half hours required to cremate a body and its casket, adds environmental journalist Mary Woodsen, a board member of New York’s Greensprings Natural Cemetery. “You could take 83 round-trips to the moon on the power used annually for U.S. cremations.”

All of this runs completely counter to what seems natural to me. I abhor the idea of my family spending thousands of dollars on something that I see as unnecessary and that is harmful to the earth. The alternative presented is called a “conservation funeral.” The first company to provide this service is the Ramsey Creek Preserve. The family purchased a 36 acre farm in South Carolina and converted it into a nature preserve. Here, people are laid to rest in their natural state without chemical preservatives (ice or dry ice preserves the body for transportation). The caskets are simple wood and biodegrade. The phrase “ashes to ashes and dust to dust” comes to my mind. The body becomes part of the nature preserve and enhances the beautiful preserve. The graves are dug by hand. Only native species plants are allowed and graves are marked by simply carved stones native to the area. When families visit their loved ones they go to a nature preserve instead of a cemetery which has a more industrial feel to me.

One of the best parts is that a conservation funeral is actually cheaper than a traditional one. Because bodies cannot be embalmed a considerable cost is eliminated. The average cost of a traditional burial and funeral in the US is $7,300. According to the article, “a burial at a conservation cemetery the whole package, including green funeral home services, eco-coffin, burial, and plot, might average around $4,000.”

I do believe that it is important to be good stewards of the beautiful earth God has provided us with. Death is a natural part of life.  Conservation burial seems like a green and frugal way to make our final farewell natural- the way it was intended to be.

“In the sweat of thy face shalt thou eat bread till thou return to the earth out of which thou wast taken: for dust thou art, and into dust thou shalt return.”